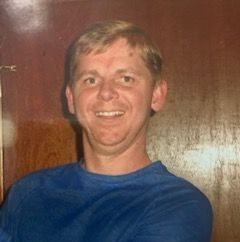 Mark was a loving, playful, thoughtful human being. Being around him felt good, as he saw the best in everyone. As a partner, father, friend, sibling, son, uncle, brother-in-law and community member, he enriched the lives of many with his acceptance and love.

Mark, one of seven children to Ron and Marilyn Farnsworth, (Carol, Kim, David, Ron, Bob and Steve) was born and raised in Portland, OR. He graduated Cleveland High School, and went to work in the restaurant industry, as a dishwasher, a cook, a server and ultimately a bartender. It was at the Red Lion Downtown where Mark met his wife, Elizabeth, in the Club Maxx bar– she was a cocktail waitress and he was the bartender. A Greek sea captain named Nicolas Pipulus encouraged them to date, and they fell in love.

Mark and Elizabeth’s first adventure together was Elizabeth’s cancer diagnosis at 26 years old, and the ensuing treatments that put the cancer into remission. Mark refused to break up with Elizabeth during this time, and won the hearts of Elizabeth’s friends and family as he cared for her throughout her treatment.

Mark’s first big trip with Elizabeth was to Spain and Portugal. Elizabeth showed Mark the museums, architecture and culture, while Mark showed Elizabeth Portugal’s beaches and nightlife. Their travels continued: China, Thailand, England, Scotland and Wales. They never made it to Australia, but traded in their travels for their precious children, Isabella, Serena and Remi. Mark also claims their niece Malayna as his “fourth daughter” and was grateful for all the time he was given with them all.

Their family would be their greatest adventure, and Mark found his true calling in life as “Dad”. He packed love and adventure into each day. Summers were the sweetest, going to the local pool, park lunches, Burgerville, summer reading at the library, the arcade, OMSI and plenty of time in the backyard, making wonderful memories with the kids.

Being a curious and open hearted individual, Mark went back to school to learn more about everything. He received his Associate’s Degree from PCC, a B.S. in Sociology from P.S.U., and a Masters in Teaching (M.Ed) from Concordia University. As he continued to learn and to expand his thinking, so did his heart. Mark worked to understand others, and to further develop his empathy. He began his teaching career as a substitute teacher, and it was during this time that he was diagnosed with Stage 4 Rectal Cancer. Though his time in school classrooms was brief, Mark became a teacher to so many as he navigated living with cancer.

Mark went through almost nine years of various treatments, including chemotherapy, acupuncture, Chinese herbs, radiation, craniosacral, chiropractic, massage, and energy work. He meditated, juiced, changed his diet and welcomed in all the good energy and prayers. And basketball. Mark loved basketball, and enjoyed playing even throughout the first few years of treatment. He conserved his energy for time with family, and for basketball. He enjoyed following Portland’s TrailBlazers, and enjoyed every game he got to go to. He shared this love with his kids, and coached Bella’s basketball team for three years. When asked how a game went (one he played, or watched), it was hard to determine who had won, as he always had something positive to say about the game.

Before there was basketball, there was break dancing. Mark and his friends even made it on TV via a local cable channel. If you’re lucky, and flipping stations some night, you just might get to see Mark doing “The Worm” or “popping”. Mark also loved karaoke, and some favorites were “Summer Lovin'” from Grease, “You gotta fight for the right to party” by the Beastie Boys, and Journey’s “Don’t Stop Believin'”. Mark’s all time favorite movies were Grease and Dumb and Dumber. Mark loved Jim Carrey and often quoted Dumb and Dumber. His favorite line guided his cancer journey, “So you’re sayin’ there’s a chance!) (This was after being given one in a million odds that a woman would ever date him)

Throughout the years Mark made many friends, and after his cancer diagnosis, his family was well cared for and Mark was cheered on by many. Mark received great care from so many Kaiser doctors, nurses and staff, as well as from the talented naturopath and acupuncturists at IEP. Mark attributed his ability to live with advanced cancer for so long in large part to the complementary care he received such as chiropractic, massage and CST. Mark really appreciated the balance of supportive treatments to his grueling chemo sessions.

In June, Mark learned that his cancer was in his brain, and no longer treatable. Mark’s spirit slipped away on August 3rd, as he was held by the love of his life, Elizabeth. Mark never battled his cancer, he never won or lost. Cancer existed in him, and love, medicine and miracles helped his body balance his disease with his desire to live. Mark accepted his inevitable death, though he held onto possibility until the end. Two of his sweetest quotes were “I’m going to get my spiritual wings”, and “I made a decision. I’m going to leave hospice. I’m going to start a brand new life”

Mark leaves behind so many dear friends and family, whom he has promised to watch over.

“You are ready and able to do beautiful things in this world and after you walk through those doors…you’ll only really ever have two choices: love or fear. Choose love. And don’t ever let fear turn you against your playful heart.”

Please join us for a memorial and help fill our hearts with the reverberations of love that Mark has put out in the world:

In lieu of flowers, if you wish to make a contribution, we are setting up an education fund for the children, Bella (just starting at Portland State University, class of 2026) and Serena and Remi, class of 2030.

Thank you so much for your love and support.